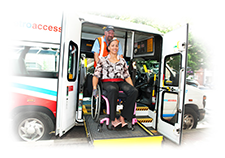 Access to public transportation is a key to independence and full community participation for people...

Fully autonomous vehicles (AV) or self-driving cars are on the horizon. Self-driving cars can cause the kind of cataclysmic change in the lives of people with disabilities that the invention of the automatic washing machine did for women. But, the promise of the technology will only be realized if the cars are truly accessible to people with disabilities, and the laws and policies developed by states or the federal government do not present unnecessary restrictions based on myths or fear. DREDF is working in coalition with other disability advocacy groups to promote the interests of disabled people as AV technology and accompanying laws and policies move forward.

END_OF_DOCUMENT_TOKEN_TO_BE_REPLACED

The FTA has released a major research report on ADA paratransit – developed by a team headed by DREDF.
The Accessible Transit Services for All (ATSA) project presents successful strategies for providing ADA paratransit that transit agencies can use to improve service effectiveness and cost efficiency. END_OF_DOCUMENT_TOKEN_TO_BE_REPLACED

A Series of Topic Guides on the Americans With Disabilities Act and Transportation.

Funded by the Federal Transit Administration to provide technical assistance on ADA transportation.

The Topic Guides on ADA Transportation bring together the requirements of the ADA and the U.S. Department of Transportation (DOT) ADA regulation, Federal Transit Administration (FTA) determinations, and operational practices that comply with the ADA.

On June 13, 2005, the National Council on Disabilities published The Current State of Transportation for People With Disabilities in the United States, researched and written by DREDF’s Marilyn Golden and Richard Weiner of Nelson/Nygaard Consulting Associates. The report analyzes all modes of surface transit and all related current transportation policy issues, addressing the key significant unresolved issues that still face people with disabilities today in the areas of fixed route bus and rail transportation, ADA complementary paratransit, approaches that have resulted in service improvements on public transit, public rights of way, privately funded transportation including accessible taxi service, non-traditional forms of transit service, and transportation in rural areas.

“ADA Paratransit Eligibility: How to Make Your Case” — DREDF, in cooperation with Equip for Equality (Illinois Protection & Advocacy), has developed a guide to assist people with disabilities to obtain an accurate and fair determination of their ADA paratransit eligibility.
Download the PDF version.

In early 2006, the U.S. Department of Transportation proposed important changes in the ADA transportation regulation affecting key issues such as whether transit agencies should be required to modify policies, practices, and procedures when necessary to avoid disability discrimination, and whether certain rail systems should be required to provide full platform access. DREDF disseminated model policy comments on these issues.
Read DREDF’s Action Alert

In a brief to the U.S. Court of Appeals for the Second Circuit, the U.S. Department of Transportation affirmed the right of ADA eligible paratransit users to next day service. The brief states unequivocally that DOT‘s ADA regulation requires transit agencies to “design, fund, and implement a next-day service to meet the foreseeable needs of all ADA-eligible individuals.” The pro-consumer content of the brief is a clear victory for disability advocates.
Read the brief.