Skip to content
Bycycle
Despite being sighted in multiple locations at various points in the past 12 months, details have been thin on the ground for the updated Summum downhill bike. That wait is finally over, though, and Mondraker has revealed the details of the bike we’ve been seen being tested under its team riders since Lenzerheide last year.

The Summum has plenty of race-winning pedigree, with Laurie Greenland taking its most recent victory at Val di Sole last year. As such, Mondraker didn’t feel the need to overhaul the bike completely, but a number of key changes have been implemented.

The biggest tweak is the frame material – all three specs of the Summum are now aluminum only with no carbon options available. While this does probably increase the weight of the bike, Mondraker claims it offers a “fast, active and natural riding experience”. Apparently, Mondraker’s World Cup riders found the aluminum bikes more responsive, and that’s what pushed Mondraker towards using the material for the final construction. The tubes of the bike have also been slimmed down, bringing its silhouette more in line with the Foxy and SuperFoxy.

There has also been a big overhaul with wheelsize, and these frames have been predominantly designed around 29″ wheels. All the full builds, apart from the S and M sizes of the base Summum, come with downhill’s largest wheels and those two exceptions come with 27.5″ front and rear. Both Brook MacDonald and Laurie Greenland were racing on mullet bikes towards the end of last year, and that’s also an option for Summum riders, but they’ll have to go via the frame only route.
There have also been some geometry changes too. For starters, the bike is slightly steeper, with the head angle now sitting at 63.5°, up from 63° on previous models. The seat angle is also steeper to make room for a bigger rear wheel. The biggest change comes in the reach where the bike has grown by around 30mm per size. Mondraker’s Forward Geometry was one of the big driving factors behind modern geometry so it’s no surprise that the Spanish brand continues to stretch out its bikes in 2020.

Also on the geometry front, there’s no longer any adjustment available for this bike. Previous Summums had the option to lengthen and shorten chainstays, but the new models have them set at 450mm, the size both Laurie and Brook were running last year. Suspension kinematics have also been given a small tweak and the bike’s 200mm rear travel is now a bit more progressive for the biggest hits of high-speed World Cup racing. The full geometry is below: 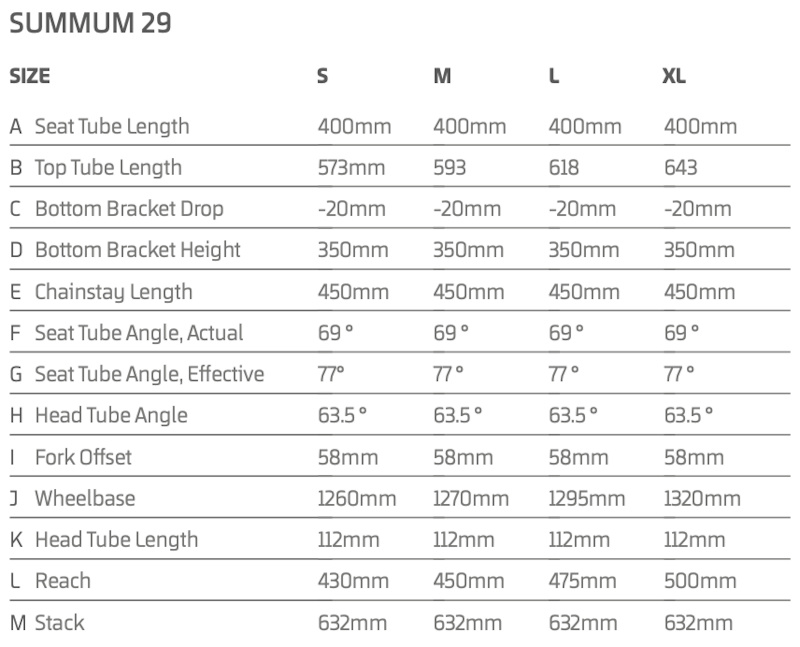 3 models of the bike will be available with the Summum 27.5 and 29 forming the base level and the Summum R and Summum RR above them. A frame only option is also available. Prices start at €4,199. More info, here.