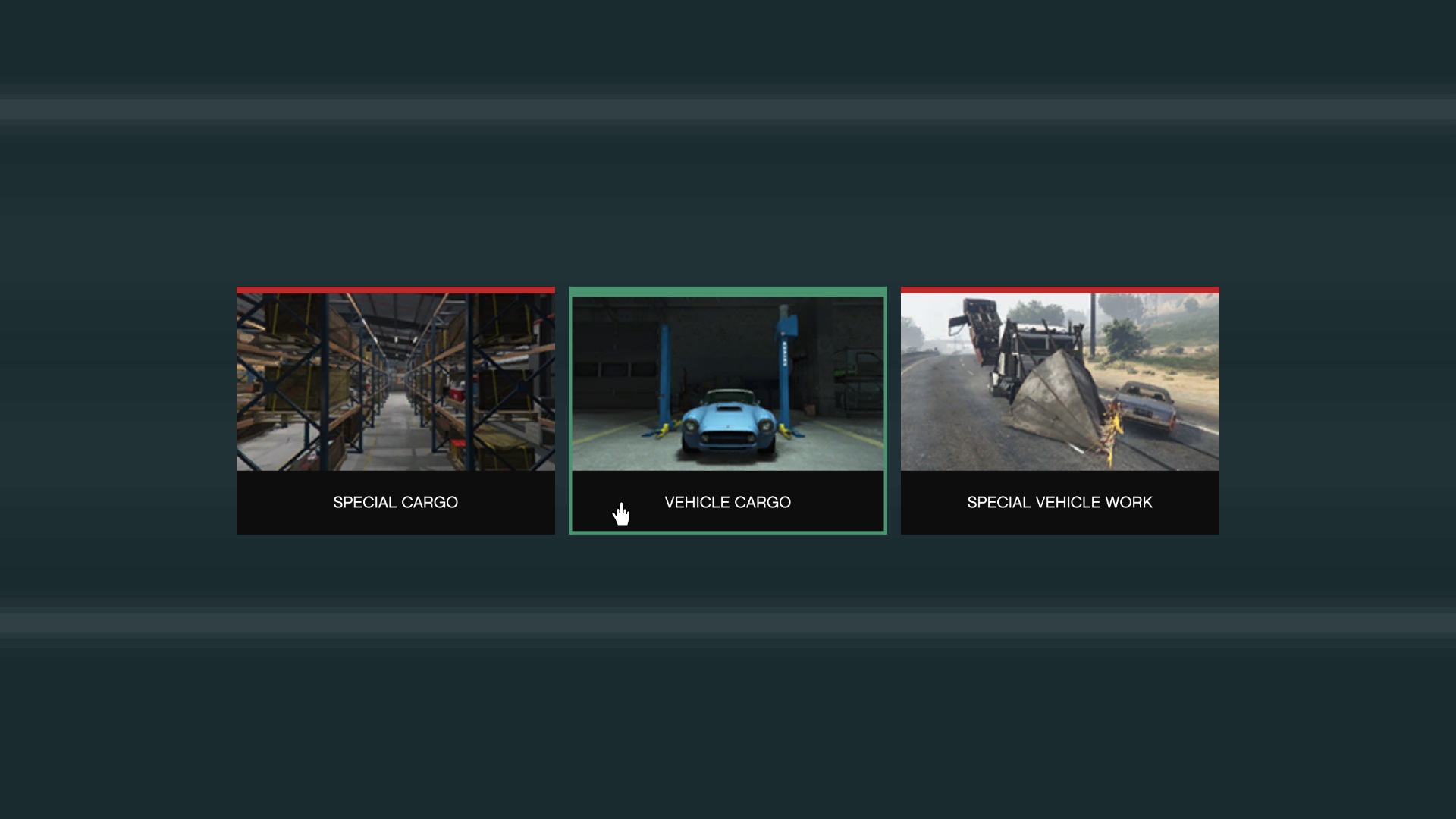 This article or section refers to “enhanced version” content in the Xbox One, PlayStation 4,...

Vehicle Cargo is a CEO mission featured in Grand Theft Auto Online as part of the Import/Export update.

“Welcome to SecuroServ’s real-time database of vulnerable high-end vehicles across San Andreas. Hit the ‘Source Vehicle’ button to instantly pinpoint the location of your next golden opportunity.“

Vehicle Cargo missions are relatively straight forward compared to Special Cargo, where the player can fill their Vehicle Warehouses with up to 40 stolen vehicles. When exporting them, the player can sell 1 to 4 vehicles at a time depending on the number of associates the player has in their CEO Organization in the session. There are also collections of vehicles that can be sold together, retrieving and successfully exporting the vehicles that complete a collection will offer bonus payments made to not only the CEO but to the associates as well.

Vehicle cargo missions can only be conducted in Public Free Mode sessions, but there is no minimum player limit so a player alone in a public lobby can participate, but will be limited to exporting single vehicles at a time and will be unable to export any collections.

Completing Vehicle Cargo missions unlocks the “Special Vehicle Work” missions, every 4th car successfully warehoused will unlock one of the eight special missions available. In order to unlock all of them, 32 cars must be warehoused.

When sourcing vehicle cargo or when exporting it, the rest of the players in session will receive a message alerting them of the organization moving vehicle cargo, once the global signal countdown is over. The vehicle cargo will be represented then by a blinking red car in the map.

If another player not belonging to the organization gets in one of the cars, they can bring it to a police station and earn $5000 in cash, or bring it to their warehouse if they have one and are currently registered as a CEO. In the latter case, they will have to pay for any damages, similarly to when they source a vehicle the usual way.

“Steal the sourced vehicle and deliver it to the warehouse. Mission difficulty is scaled based on the marked value of this vehicle.“

“Take care of the Vehicle during delivery The more damage it takes the higher the repair cost will be.“

“The vehicle will need to be repaired if it becomes too damaged. The more damage it takes the higher the repair cost will be. The CEO will be charged by the mechanic upon delivery to the Warehouse.“

Vehicle missions are started by logging on to the desktop in the office, selecting Vehicle Cargo option and clicking on the source vehicle button. The vehicle will range from top range to standard range randomly. Once a vehicle is sourced, a text message with the info of the vehicle and a picture will be sent to the player via text message on their in-game phone and the Assistant will call the player to describe the task on exit from the office.
Obstacles will present themselves to the player, as they go for the vehicle with different scenarios randomly being used. When delivering a vehicle, NPCs may pursue the player and open fire or the player may become wanted by the police. The player should attempt to keep the car in good condition to avoid high repair costs to maintain the mission profitability. The maximum amount a repair can cost is $34,000. Once the damage bill reaches $34,000 it will not increase in value but the vehicle can continue to receive further physical damage until it is eventually destroyed, resulting in mission failure.

“Details should be with you on this car, it’s parked at that location. This is straight forward enough, let’s get this one back in good shape.”
— Assistant

“Urgent info – the car is fitted with a bomb. It will blow if the speed drops too low. Keep up a good speed and we’ll try and find a fix from this end”
— Assistant

“Not good – some amateur took the car and now they’re leading a trail of cops round the city. You’re going to have to get the car off them and bring it in”
— Assistant

“Okay, so SecuroServ couldn’t get the car’s present location, but the got a picture of its last sighting. Its on the way to you now. Try to narrow down the location from the pic, get the car and bring it in to the warehouse”
— Assistant

“Okay, so the car is on the move, you’re going to have to take it en route and bring it into the warehouse”
— Assistant

“Today we’re robbing an arms dealer. Only problem, his car won’t start without its immobilizer. He’s having a party, go over there, find the key on one of his guards, and bring it in.”
— Assistant

“So, thanks to stupid thieves and social media, SecuroServ traced this stolen car to a race meet. Get over there, steal it again, and bring it to the warehouse.”
— Assistant

“You won’t be able to drive this one out of there. It’s heading offshore with some pretty nasty individuals, so it’s going to need an airlift. Collect a heavy lift chopper and then collect the car.”
— Assistant

“Okay, the morality on this one is a little less murky. The car owner’s bet the pink slip that no one can beat his point-to-point time. Beat it, collect the car, and bring it in.”
— Assistant

“So, this car’s being used in a photoshoot of some kind. Ignore the flashing lights, just get the vehicle and bring it in.”
— Assistant

“So, this car’s being used in a stunt on a movie set. Head over there and take the car but look out, you probably won’t be able to hey out unless you complete the stunt yourselves.”
— Assistant

“Alright, this car’s doing laps around a closed circuit. Stop the car, take it, bring it to the warehouse. I wouldn’t expect resistance.”
— Assistant

“Yeah, so this car’s being held on a routine traffic stop. Get over there and commandeer the vehicle before they move it on.”
— Assistant

“So, this vehicle’s been involved in an altercation of some kind. Cops are on the scene. Do what you can, pick it up, and drop it off at the warehouse.”
— Assistant

There are a total of 32 different vehicles to be stolen, with 3 possible variations (plates, colors and modification combinations) of each vehicle, one* of which will fit into the Collection Vehicle Cargo.

Vehicle warehouses have a capacity of 40 cars and there are 32 individual models available to import. Target vehicles are randomly selected from the list of 32 but will not double up until the player has stored one of each of the 32 models. Players can take advantage of this.

Selling vehicles is pretty straight forward. After the player has delivered a vehicle to the warehouse they can sell it right away. The player must go to the Ad-Hawk Autos website on the computer located in the vehicle warehouse office and selecting 1 to 4 vehicles to sell or a collection if the player has completed a collection.

Selling vehicles can profit the player, in summary, between $15,000 and $80,000 per vehicle, depending on vehicle class. This does not include additional bonuses. These are subject to change during special events, such as 2x GTA$ events.

“You have completed a Collection. Sell this to an interested Buyer to earn additional bonuses for all Members of your Organization”
— In-game message