Skip to content
Connor Fearon had big plans this year, and was hoping to double up on EWS and World Cup duties to prove his 3rd place at EWS Derby was no fluke. Unfortunately, as with so many other things this year, COVID-19 got in the way and travel restrictions meant he was forced to stay at home for the race season in Europe. He’s been able to keep himself busy in another way though – building up and racing a 2007 Kona Stab Deluxe.

He found the frame and wheels on eBay and built it up by delving deep into his parts bin and sourcing some bits from friends too. The hardest part to pull together was apparently the Boxxer, but Connor’s friend Lindsay Klein managed to find a pair in his shed that had been sitting there for the last decade.

Connor unveiled the bike at the Inside Line Mountain Bike Club race at Eagle Mountain Bike Park and finished second to Troy Brosnan by only 6 seconds. Apparently the biggest difference between the two bikes comes down to size, with the medium Stab coming up way too small for him. He also noticed fatigue was an issue. He says, “I got way more tired riding the old bike, I think that comes down to fit and suspension. In comparison, you just stand in the middle of a modern-day DH bike and let it do most of the work!”

It’s safe to say there have been a fair few changes in downhill bike tech in the past 13 years so to see just how far things had come we got both bikes side by side to compare more than a decade of progress.

FrameWhat a difference 13 years makes. While the link-driven single pivot still remains king for Kona’s downhill bikes, the frame surrounding it is completely different. Kona now uses a carbon front triangle and the whole package looks a lot cleaner than the classic design. There has also been a decrease in travel from 8″ (203mm) on the Stab to 195mm on the Operator. The final big change comes from the wheelsize where Connor currently runs 29″ front and rear on his Operator, but 26″ front and rear on his Stab, which is from an era when the bigger wheels were nothing more than punchlines.

Connor runs a medium frame on the Stab although he’s actively looking for a larger one as it is a bit too small. If you know where he can find one, get in touch!

The Boxxer is a name that has been around in mountain biking since 1998 so it’s no surprise to see it on the front of both bikes here. It’s a 200mm model on the Stab but only 190mm on the Operator.

A Charger damper and Debonair spring replace the Motion Control and Solo Air Spring of the earlier fork. With the new tech comes more tuning options as well and high and low speed compression can now be set on the Boxxer and bottomless tokens can be added.

With the advent of metric sizing in 2016, Rockshox swapped over from Vivid shocks to Super Deluxe for downhill. The shock on the Stab is shorter eye to eye than stock, so it has slackened the head angle to a bit less than 64° and makes the cockpit feel even more cramped. Connor is looking to find a regular sized one if he can.

26″ plays 29″ when it comes to the wheels for Connor’s bikes. The Stab is still set up using inner tubes so Connor has to run them at higher pressures to avoid pinch flats, although it apparently hasn’t been fully successful so far. Tubeless and Cushcore allow him to go down to 24psi front and 27psi rear with punctures much less common nowadays.

The wheels on the Stab are clad with a classic High Roller front and Minion DHF with the super sticky Slow Reezaay 40 compound from an era when tire hot patches were a bit less boring. Connor runs a Minion DHR II front and rear on the modern race bike.

Connor has allowed himself modern parts when it comes to his contact points. That means a Deity cockpit and saddle, HT flat pedals and ODI grips on both bikes.

It’s SRAM DH gearing on both bikes but the product line has definitely moved on a bit in the gap between these two bikes. The SRAM X0 Connor is running is a bit newer than the Stab frame but it’s a 10 speed cassette with 12-26t on the cassette. The modern Operator has a similar range on its 10-24 cassette but it does it with just seven speeds thanks to the XG-795 mini block cassette on the X01 DH groupset.

Brakes are also SRAM and it’s Code RSC brakes on the Operator but Avid X0 Trail brakes (from 2012) on the Stab.

Sat Sep 12 , 2020
MANILA, Philippines — The government has approved a proposal to reduce the physical distance between commuters in public transport vehicles starting September 14, Transportation Secretary Arthur Tugade announced Friday. Tugade said the Economic Development Cluster (EDC) and the Department of Transportation’s (DOTr) proposal was approved and supported by the National […] 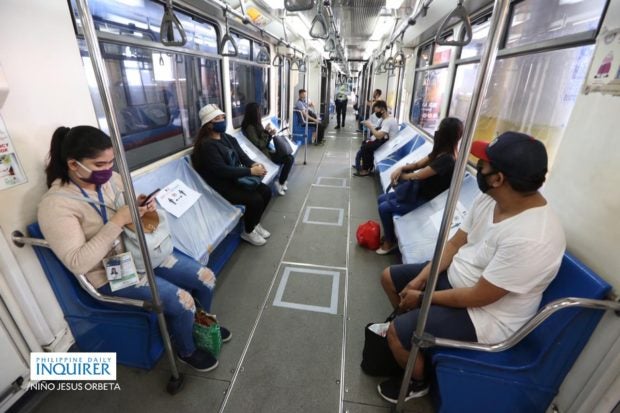