Environmental groups had mixed reactions to Governor Newsom’s announcement. While they applauded the new goal for zero-emission vehicles, they noted that California remained one of the country’s largest oil and gas producers, particularly as energy companies have used hydraulic fracturing to unlock new fossil-fuel reserves in recent years.

“Setting a timeline to eliminate petroleum vehicles is a big step, but Newsom’s announcement provided rhetoric rather than real action on the other critical half of the climate problem — California’s dirty oil production,” said Kassie Siegel, director of the Center for Biological Diversity’s Climate Law Institute.

In his news conference, Governor Newsom said he lacked the authority to ban oil and gas drilling in the state on his own. His executive order sets a goal of ending new permits for hydraulic fracturing by 2024, and he said he would work with California’s legislature to set rules that would better protect vulnerable communities from nearby fossil-fuel extraction and help the state’s energy industry transition away from oil and gas.

“None of us are naïve. California is a fossil fuel state,” he said. “We need to focus on a just transition.”

The oil and gas industry reacted sharply to the order.

Asked why he was moving forward with the electric car mandate by executive order rather than asking the legislature to approve it, Governor Newsom cited the example of the state’s new rule requiring all trucks sold in California to be zero-emissions by 2045, which was rolled out by the state’s clean air regulator, the California Air Resources Board.

Thu Sep 24 , 2020
Factors such as changing customer expectations, accelerated adoption of modern technologies, and shifts in competitive power are dominating the global automotive sector. Increased convenience for customers and job opportunities are two of the biggest positive factors in the global automotive sector. However, to grow in this industry, companies must overcome […] 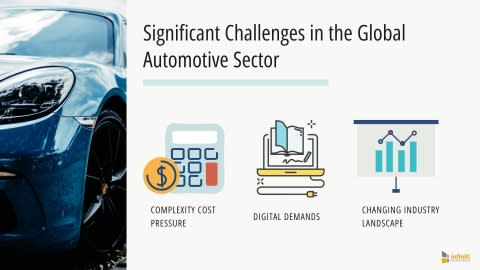