The Call of Duty Modern Warfare Season 6 release time has been set for 7am BST in the UK on Tuesday, September 29, and 11pm PDT on September 28 in the United States.

A message from Activision confirms: “After months of infighting between former allies, further fueled by the arrival of Shadow Company, the recently dispatched Nikolai and Farah make a game-changing discovery in the hunt for Al-Qatala: they use empty subway tunnels to move around the city without a trace. With a flip of a switch, the long-defunct transportation network powers up, bringing what’s left of Armistice back on track towards ending this dangerous international syndicate’s stranglehold on Verdansk.

“This all sets the stage for Season Six of Call of Duty: Modern Warfare, available on September 28 at 11PM PT.”

ORIGINAL: Fans still have a few days to wait until the Call of Duty Modern Warfare Season 6 update drops on PS4, Xbox One and PC.

From what has been shared so far, gamers can look forward to another big Battle Pass, Warzone map changes and additional weapon updates.

It’s unclear how long Warzone Season 6 may run for but there will be plenty of excitement for when it ends too. That’s because the next COD game – Black Ops Cold War – will be arriving in November, which will take over the support of Call of Duty Warzone.

And a new update out this week appears to have confirmed that official Call of Duty Modern Warfare Season 6 release time.

WHEN DOES SEASON 6 OF MODERN WARFARE START?

Developers Infinity Ward has confirmed that the Call of Duty Modern Warfare Season 6 release date has been set for Tuesday, September 29, 2020.

And the good news is that we have learnt more about when the big update will be dropping onto PS4, Xbox One and PC, according to different time zones and regions.

From what has been shared this weekend, the Call of Duty Modern Warfare Season 6 release time has been set for 11pm PDT on September 28 in the United States, and 7am GMT in the UK on Tuesday morning, September 29.

This news has been shared via the Call of Duty Season 6 update going live early on the PlayStation Store. According to PS4 gamers, it’s now possible to preload the Call of Duty Warzone patch to be ready for its final launch.

Call of Duty Modern Warfare update 1.27 reportedly weighs in at around 20GB and is available to some PS4 gamers now. This has happened in the past, so there’s a good chance that all PS4 gamers will be able to download the patch on Monday.

This won’t mean you can start playing early, but it will mean you can have everything in place so you can install when the update goes live on servers.

For those interested in finding out if they have access to this latest, you can click on your copy of Modern Warfare and choose the check for update option.

If it is possible to preload the new Season 6 update this week, it seems likely that the feature will be announced by Infinity Ward in the coming days.

Modern Warfare Season 6 is the next major update for the game that will add new map locations in Warzone.

Activision has confirmed that the Subway System will be coming online on September 28, bringing with it new ways to get around the map.

The good news is that this will make it easier to get around the map, although there will still be plenty of risk involved.

While these subway areas already exist on the map, you can expect teams to start camping out on rooftops to make getting around on the metro as challenging as possible.

Here’s more from Infinity Ward, who confirmed in a new blog post today: “Each train’s interior design may not have been updated since this system was first built, but despite their “retro” appearance, they are still equipped with some state-of-the-art technology that mitigates issues involving the circle collapse and combat.

“Specifically, a subway train will not move to a station that is under the effects of the circle collapse.

“This avoids a situation of a squad hopping aboard a subway that leads to an untimely death… unless, of course, it’s at the hands of another squad waiting at the next station.

“Speaking of fighting, there is no room for roughhousing onboard the Metro.

“In fact, the subway will not move at all if there is any conflict on board, or between the train and the platform, so keep fighting to the platform, stairwells, and outside the station.

“Use this limited downtime to reload weapons, swap items around the squad, or just take a breather before getting out at the next stop.

“This almost goes without saying, but don’t try to step onto the subway tracks.

“Not only is it a recipe for death, but your squadmates will most likely be unable to pick up any belongings after your misadventure.”

McLaren says new hybrid sports car is in final testing, gives us our best look yet

Wed Oct 7 , 2020
McLaren has announced that it’s working on the final testing stages of its upcoming hybrid sports car. Unfortunately, it didn’t tell us anything we hadn’t heard before. But the company did release a couple of photos of a lightly camouflaged test car that give us our best look yet at […] 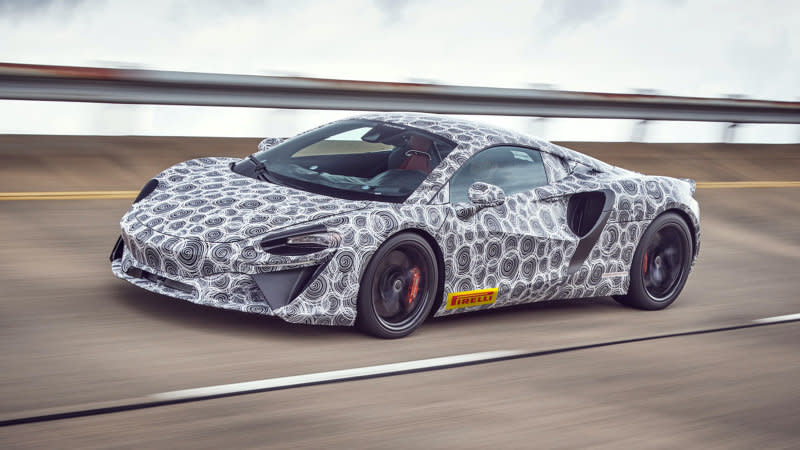